What Goes Into Good Storytelling In Scavenger Hunt Events And Games?

Good storytelling thrives on heroes and an ambitious goal. But is that enough? Only for those who want a quick happy ending. Boring! It takes more for a real experience. It’s the challenges that makes Outdoor Escape Games, City Rallies or treasure hunt games really exciting. Therefore, it is necessary to integrate a conflict here and there into the game. It is through various hurdles that the real dramaturgy is created. And here the challenges should be knitted in such a way that the team members are addressed in their different personalities. A mix of numbers, dates, facts, communicative quiz questions and creative tasks makes your game versatile and lets very different talents of the players flow in. Together you will reach your goal with fun and teambuilding!

Good storytelling is built up by various factors. So, what do you need to make your digital scavenger hunt application a unique gaming experience? That’s right, a suspenseful content and a very comprehensive scavenger hunt software! In this blog article we would like to introduce you to our espoto storytelling tool.

Stage Your Scavenger Hunt Events And Games In A Versatile Way With Our Storytelling Tool!

Flexible event branding to customize events within our digital scavenger hunt app has always been one of our most important and strongest features. This way you can optimally transfer your brand into your event and game. Also, these individual design options of an app contribute significantly to the storytelling within an event. So does working with images, videos, audios and augmented reality within tasks. However, fleshing out an event via the customization of the app – as well as an exciting story with the use of different media – is only one side of the coin. Because more than ever, targeting players within a game as well as participation in the gameplay and influence on decisions plays an important role in storytelling. In order to meet these demands and to enable special experiences, we have greatly developed our software in the last two years.

For the game experience, it is important to enable different storylines and decision paths in the course of the application – because only when the outcome of the game is not immediately foreseeable and different responses of a player in turn have different effects on the game events, the arc of suspense is maintained until the end. And here we have created a wide range of possibilities in which teams can actively influence your game in different directions. But building different storylines is not the only strength of the storytelling tool. You can also build different level systems and difficulty levels. Friends of risk will get their money’s worth with the poker round function: here, the points earned can be doubled or tripled in a short time! Or lost to the same extent. This can completely change the ranking among the teams in the course of the game. And also, decisively change the final result at the end. Furthermore, our popular bonus rounds can be used flexibly to earn additional points without risk. 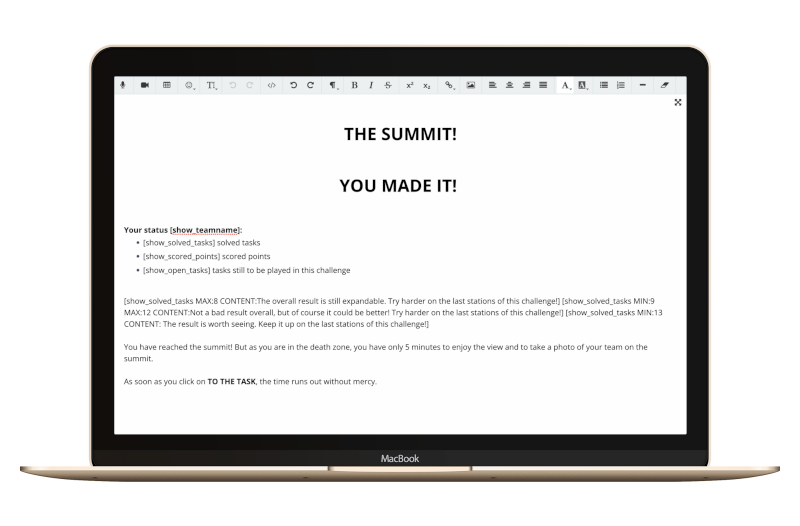 Experience More Personality: Our Keyword Feature Offers Another Current Highlight For You!

Until now, teams could enter their team photo and name to compare the high score during the game, chat or rank the game at the latest at the award ceremony. This summer 2022 we have developed another highlight, the new “Keyword Feature”. This takes interaction and communication during the game to another level. With our Keyword Feature, teams can now be directly addressed again and again, even within the tasks. This makes the game even more personal and keeps motivation high throughout the game. But how does this work in the application?

The feature is as simple as it is effective. You can simply use certain keywords in your task texts from time to time, which are then automatically filled within the app with specific data such as the team name, points earned, tasks solved, open tasks and much more. And the content can also vary in this respect, as calculations can also be made with the help of these keywords. For example, you can show or hide parts of the text within your tasks depending on the individual score or on the solved and unsolved tasks of the team and thus respond even more specifically to the circumstances of the game and the actions of the team. Simply describe a team as heroes if they have solved 100% of their tasks at one point in the game and, conversely, describe their performance as capable of improvement if only a few tasks have been solved up to that point.

Conclusion: With Our Storytelling Tool Your Scavenger Hunt & Quiz Events Get Dynamic And Promote Motivation!

With our storytelling tool you bring excitement into your scavenger hunt event with different individual possibilities. The different storylines and decision paths elevate your application to a new level of gaming experience. An interesting dynamic is created, which keeps the motivation high during the entire course. The brand-new keyword feature also offers the possibility to add even more personality and communication to the game process.

But the Storytelling Tool and the new Keyword Feature is just one of our numerous storytelling features that we offer you to inspire with your storytelling: for example, also use the design of the tasks through immersive media, videos or sounds. And use the possibilities of different Google map designs, individual map overlays and personal team and spoticons. Game-relevant mechanics can also be labeled to further customize the experience for your target audience.

Are you looking for software to make your scavenger hunt gaming experience unique?

We don’t just offer you a storytelling tool to create individual experiences. How about a digital scavenger hunt white label app? With a personally designed white label app, your customers experience your applications and events with your brand message and CI. Because we at espoto are passionate about developing and designing software solutions for businesses and educational institutions. In this context we are currently working with event organizations, tourism facilities, schools, Escape Game providers and associations. And we are open to and curious about further projects and industries.
Would you also like us to playfully design your processes? Then we look forward to the exchange!

As a software developer located in Berlin we are specialized on “mobile serious games”.

We support our partners with powerful, customized and creative software solutions, ideas and concepts for challenging team buildings and corporate events for groups up to 2000 people. We maximize their event benefits and combine educational aspects with team spirit and fun.

Due to our 20 years experience in event management and team building, we know exactly what our partners need. Our solutions have a user friendly interface, are available as a white label app and based on a modular principle.

INVESTMENT IN YOUR FUTURE

This system was funded by the Ministry of Economics and European Affairs of Brandenburg and the EU. The author is responsible for the content of this publication.

As a software developer located in Berlin we are specialized on “mobile serious games”.

We support our partners with powerful, customized and creative software solutions, ideas and concepts for challenging team buildings and corporate events for groups up to 2000 people. We maximize their event benefits and combine educational aspects with team spirit and fun.

Due to our 20 years experience in event management and team building, we know exactly what our partners need. Our solutions have a user friendly interface, are available as a white label app and based on a modular principle.

INVESTMENT IN YOUR FUTURE

This system was funded by the Ministry of Economics and European Affairs of Brandenburg and the EU. The author is responsible for the content of this publication.